You are here: Home / Apps / An in-depth analysis of anti-social app Cloak 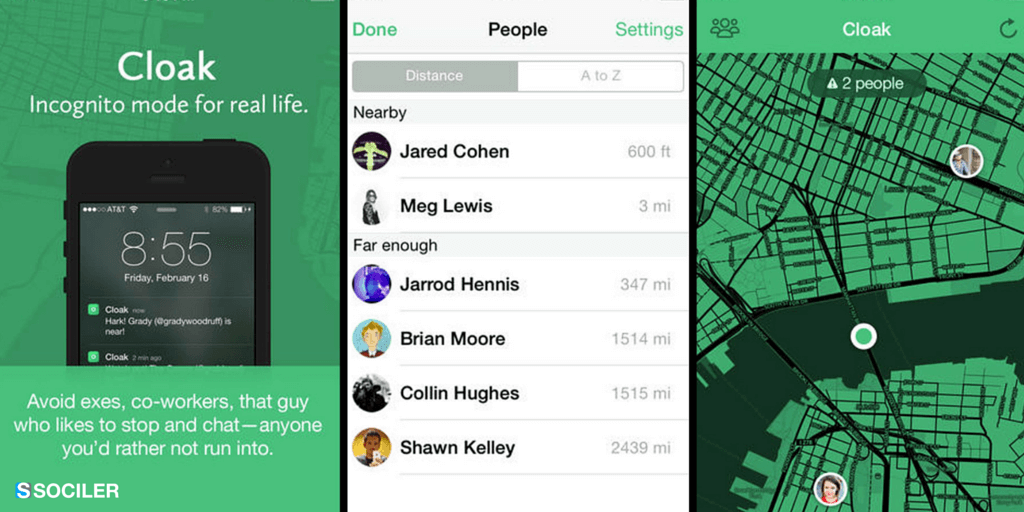 The world has seen enough of social networking websites and apps like Facebook, Twitter, Google Plus, Instagram, Whatsapp, Foursquare and a lot of others. Basically, all these apps, what they do is connect people living around the globe, forming their virtual network online. In some ways, these services have been of great help to mankind while in some cases, we wish they’d rather not be present at all. There are many cases in our life when we’re trying get work done, but end up wasting all the valuable time on things like Facebook and Twitter. This is probably the downside of these platforms, about which even the most avid users agree.

All the apps we’ve known till now basically promote social interaction. But have there been any service which can be dubbed as ‘anti-social’? Well, it’s just about the case with a new service called ‘Cloak’. It’s a new direction social media is heading to and we bet, we’ll have plenty of such anti-social apps in the future. Being anti-social means what this app does is, it helps us avoid social interaction. Sounds cool or rather nerdy? Read further into this article to know more about this app.

This app ‘Cloak’ has been produced by programmer Brian Moore and the former creative director of Buzzfeed, a viral news site, Chris Baker. The idea of the app is to use public location data from other social networks to know the locations of others, whom you recognize. For now, the social networks are limited to Foursquare and Instagram. And what makes it antisocial is that users can choose to receive alerts when certain people can be judged to be nearby them, basically to avoid them.

The app claims to be anti-social. Now, you can avoid running into your exes, some chap whom you want to avoid because when you meet him, he chats and chats forever or some fellow you were not supposed to meet round the corner, for the day. However, although the app claims itself to be anti-social, it could be used in a social way too. How? Well, the app helps you know who are near to you. And, it might be the way to find your acquaintances nearby. You could even find someone, who’s always avoiding you, because he hasn’t returned your dough or other valuable stuffs or your ex, with whom you want to make amends, and surprise them to death by appearing in front of them all of a sudden, when the last thing they’d want to see is you.

What do you think of this latest development in social media? Do you think we’ll see more of them in future? Are you tempted to try the anti-social app Cloak? Feel free to leave your thoughts below.