You are here: Home / Articles / The Best and The Worst Things about Social Networks 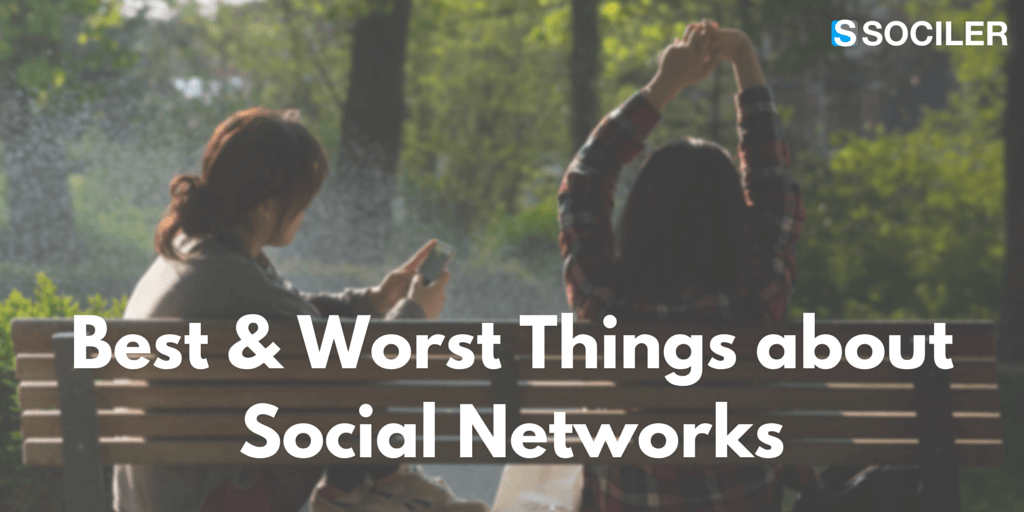 Social networking, arguably, is the loudest thing we’ve seen in the twenty-first century till now. It originated just a few years ago and boomed to become the hottest online trend. Over the years, social networking has consistently established itself as the most common form of online interaction by people. There are so many social networking sites out there today, with their own set of specialties and user base. In this article, we aim to find the best and the worst things about social networks.

1. People can express themselves with ease.

It’s very easy to express ourselves on social networks. We can tell others about what we watched, read or listened recently. We can share our opinions and insights on various topics. It’s much easier to share our ideas to a larger mass in such sites than in real world. We can, with great ease, express ourselves like we can never do in real life.

2. They are great ways to learn about how people feel.

When you express your opinion on a particular matter, people will like it or comment on it. They’ll give their own opinions on those matters. In that way, we can learn how others feel about the matter and it might also help us to validate or dismiss our own point of view. The number of likes on Facebook and followers on Twitter, have today become a great way to understand how popular or liked anybody or any brand is. Such things help, in great way, to understand public sentiments.

3. They are great ways for sharing ideas.

Social networks provide a great platform to share ideas among people. We can post or tweet about something that just struck us recently or give a link to something we found remarkable over the internet. They help us to spread our ideas to a many large number of people, at a single hit of keyboard or a click of mouse.

Social networking sites have also changed a lot, how people learn new things. We can know about something we’d never known or even thought of before, when someone posts it on such sites. When we like a page of our particular interest on Facebook, we can get regular updates about that topic, through the posts of that page and along the way, we learn a lot about that topic.

5. Groups of likeminded individuals can be formed.

Grouping together of likeminded individuals is another great thing about social networking sites. Whether it be the case of groups on Facebook and Twitter or communities on Google Plus, a large group of people having similar interests can group together in a same container and share their views, learn new things and grow along the process.

6. They help us to keep in touch with our friends and relatives.

It is probability what social networking sites are most lauded for. People use it primarily to form a link with their relatives, friends and acquaintances, from the real world. Because of social networks, we feel we aren’t much far from our dear ones, even when they’re living far far away. Goodbyes aren’t that painful as chances of a person being never met again isn’t all but washed away, like it would be when there were no social networks.

It’s easy to share ideas on social networks and it’s also equally easy, if not more, to share false ideas on them. Although internet hoaxes have been known since a long time ago, social networks add much more weight to spreading of such hoaxes. Someone comes up with sensational news and we all end up, believing it and sharing it among people. Eventually, everyone assumes the hoax to be true.

3. They can be very addictive.

The most adverse effect of social networks is often considered, their tendency to addict people towards them. People often like to know how many likes they got on or what comments they received for their recent status on Facebook. This prompts people to come back to social networks on regular basis. It can be really hazardous, if people end up, coming more often to social networks and giving more thoughts to such sites, to the point of forgetting their problems and duties of the real world.

Social networks, are probably most condemned for their knack at causing people to waste a large amount of their invaluable time, even by the most dedicated of their users. We, in many cases, come to check up something, we think important, on social networks and a lot of time is passed before we realize we’ve been doing nothing for the last hour, than scrolling through pointless statuses and comments.

5. They promote the sense of virtual reality.

Sense of virtual reality is highly likely to be promoted by social networking websites. We may value the real world less than the virtual world of social networks. Meeting or communicating with our dear ones, in real world, may seem less important. We may fool ourselves into thinking the world of social networks to be as true as the real one. We may have thousands of friends and followers on such sites and we are likely to feel we have got many people behind us. But we may not have even a few to support us through our real plights.

Stalking used to be following someone in his/her paths without letting him/her now in the past. But now, with the development of social networks, most of us think of it as checking out through stranger’s or even acquaintances’ social network profiles, for long time. This can have lots of negative impacts upon stalkers. Stalkers can spend a lot of their time wasting to check out on some stranger’s history, which is totally futile. They can even check out on their acquaintances and knowing about something particularly unpleasant, from their perspectives, can leave them with serious emotional and psychological problems.

Everything has its plus point and the down side. It usually depends on how we use those things. Same is the case with social networking sites. We attempted to find the most common ones of the best and the worst things about social media. It’s up to you to make the best or the worst out of them, for your particular case.

Did you find the article useful? Do you have other significant good and bad things about social networking sites, which we missed on this article? If you do, please feel free to comment below.