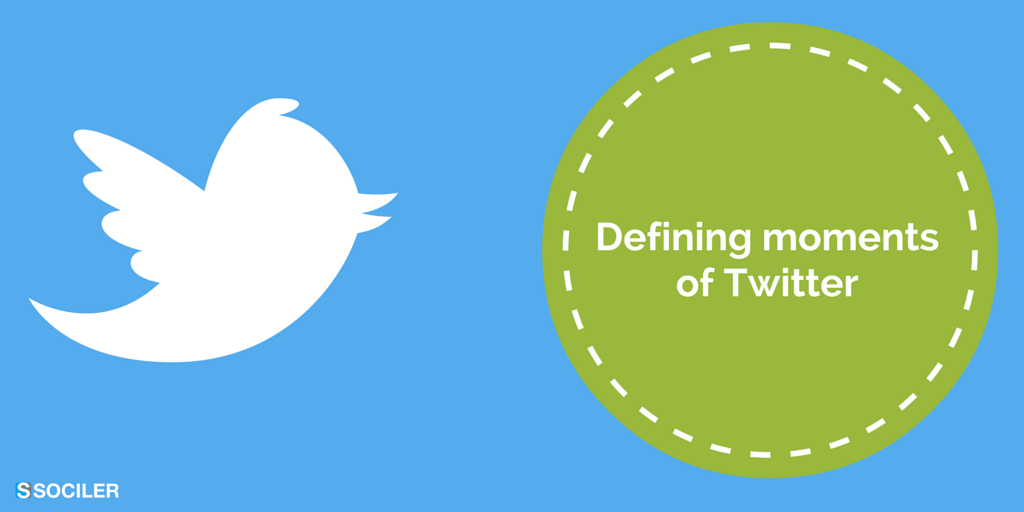 Twitter completed eight years of its inception today. Doesn’t it seem like Twitter has been there for ever and ever? But, not quite! It was created on March 21, 2006 by Jack Dorsey, Evan Williams, Noah Glass and Biz Stone. Today, it has become eight years old. It’s the world’s second most popular second networking website behind Facebook. How amazing this fact is, when Twitter is much simpler and with far less functionalities than Facebook.

It could not have been ever thought of that the world could share so much in 140 or less characters. But it is what has been through all those tweets. According to statisticbrain.com, there are more than 645 million active registered users on Twitter today. The average number of tweets a day amounts to astonishing 58 million. And, there are 190 million unique visits Twitter every month. Twitter has gone through so much in such a small period of time. But in its eight years of inception, what are the moments that top the rest? Which are the most defining moments of Twitter in its 8 years of history?

Here, we find the 8 defining moments of Twitter in its 8 years of history.

22 March 2006, 2:35 AM. It was when all things started. That was the time first ever tweet was tweeted. It was a posted by co-founder Jack Dorsey as part of an in-house messaging system for Odeo, which was the podcasting company where Dorsey, Stone and Williams were working at the time. The tweet when looked in retrospect now is rather sample. It said “just setting up my twttr.”

2. Birth of hashtag, reply and retweet

In the early days of Twitter, there were nothing like hashtags, retweets and reply. It was simply about a 140 characters or less simple text called tweet. One of the twitter users was web developer Chris Messina who first developed the idea of consolidating groups of conversation with the pound character in his tweet “how do you feel about using # (pound) for groups. As in #barcamp[msg]?” on 24 August, 2007. Similarly, Robert Andersen was the one who first used the “@” reply in November 2006 and Eric Rice was the mastermind behind the concept of retweet who literally used the word “ReTweet” in front of a message in April 2007. All three features, which came initially as suggestions from user were later adopted as official parts of Twitter lexicon.

On April 17, 2009, actor Ashton Kutcher narrowly overtook CNN to become the first Twitter user to have a millionth follower. Ashton Kutcher was one of the first celebrities to join Twitter, whose most avid users nowadays are usually the celebrities.

Thousands of individuals took to the roads of Tehran for protest after a controversial election in Iran in June 2009. The Iranian government controlled media and manipulated reports regarding the protests. The protesters then took it to Twitter to get their words out. This was probably the first time Twitter was used for a major political event and has gone on to coin the phrase “Twitter Revolution.”

January 2010 was one of the major defining moments for Twitter. Spaceman Timothy Creamer, from his account Astro TJ, sent the first live tweet from space. It had to say, “Hello Twitterverse! We r now LIVE tweeting from the International Space Station — the 1st live tweet from Space! 🙂 More soon, send your ?s.” Twitter extended beyond earth through this event.

Pope Benedict XVI joining Twitter has to be one of the most remarkable things to have happened on Twitter. With his handle @Pontifex, he became the first pope to do so on December 2012. His beneficiary Pope Francis too has followed the path, continuing the papal account.

Syrian Electronic Army hacked the Twitter account of Associated Press on April 2013 and tweeted “Breaking: Two Explosions in the White House and Barack Obama is injured.” It has been one of the most notorious cases of Twitter hacks to date, which had far-reaching consequences. The Dow Jones Industrial Average tumbled radically before recovering only when the deception was uncovered.

On September 2013, Twitter announced the IPO (Initial Public Offering), which took the technological realm by surprise since the company had been actually expected to go public only in 2014. This action has been widely viewed as a reaction to IPO of another social media giant Facebook. It is currently listed on New York Stock Exchange (NYSE) and had a market capitalization of $32.76 billion as of December 2013.

Here’s a illustrated history of twitter in a short video.