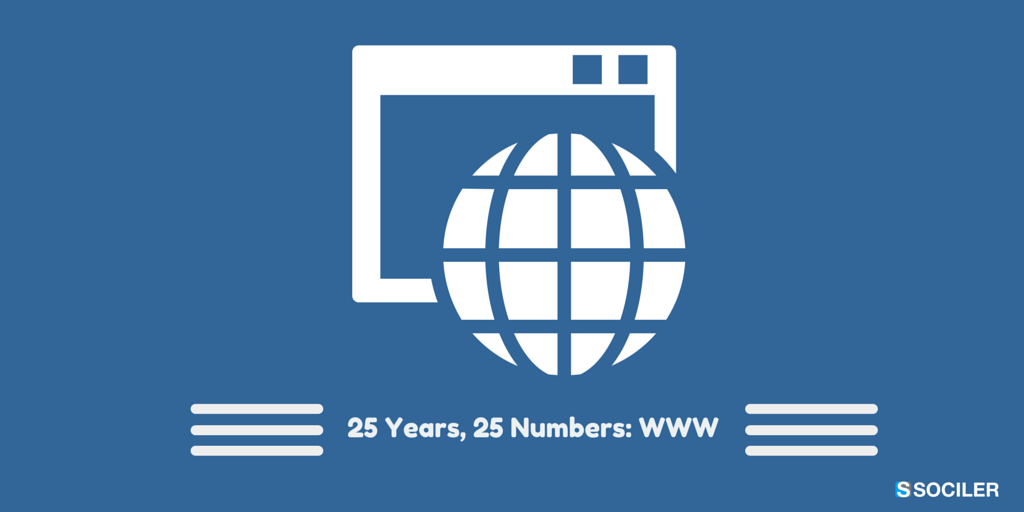 On March 12, 2014, World Wide Web turned 25 years old. Today, it has become a medium to connect the people and their ideas all over the world, in a flash of lightning. Its beginning dates back to March 1989, when Tim Berners Lee, a British scientist, wrote a proposal at CERN in Switzerland, for “a large hypertext database with typed links” which would eventually become the World Wide Web and leave a never fading mark in the history of mankind.

Now here, we take a moment to list 25 numbers and what they tell about the World Wide Web.

According to a digital research by Radicati group, more than 294 billion emails are sent on a day.

According to worldwidewebsize.com, there are at least 2.09 billion pages on the Indexed Web.

According to internetlivestats.com, the total number of websites today is around 920 million.

Hotmail was born on July 4th, 1996. It was the output of a Silicon Valley startup founded by Sabeer Bhatia and Jack Smith, and one of the very first facilities to offer web-based e-mail for free. Microsoft shelled out $400m to acquire it.

The most expensive domain flipping to this date took place in 2007. VacationRentals.com was bough for a staggering sum of $35m by Brian Sharples, founder of HomeAway.

This is the total number of new domain names registered every hour.

The first ever spam was sent on May 3, 1978. It was sent by Gary Thuerk, a marketer for the Digital Equipment Corporation. He sent that spam to 400 of the 2600 people available on ARPAnet, which was funded by the DARPA and called “first Internet.”

U.S. journalist Barrett Brown is facing 105 years of jail currently for posting a link on the web, which reported on hacked private intelligence firms.

Although it’s difficult to measure the exact statistics, Message Anti-Abuse Working Group reports tell that more than 88% of all emails sent all over the web are spam.

It is reported that 80% of the mages on the internet are of naked ladies.

Statistics show that around 75% of the websites today are not active, but simply parked domains.

63 is the maximum number of characters a domain name can have. There are several domains that fit into this category. But the record for longest single world domain in the world and also the one recognized by Guiness Book of World Records is hold by Llanfairpwllgw- yngyllgogerychwyrndrobwll-Llantysiliogogogoch.com.

55.7% of the users of the internet around the world use Chrome as their browser. Firefox comes at second with 26.9% and Internet Explorer a distant third at 10.2%.

As of April 2013, 55% of the contents on the websites are in English language. Russian is far behind at 6% with German and Spanish at close third with 5%.

More than 50% of websites today are hosted on either one of the two open source web servers Apache or nginx.

According to the figures provided by International Telecommunications Union, 39% of the world population of 7.1 billion use the internet.

American student Justin Hall created the world’s first internet based diary. He went on to maintain it for the next 11 years.

Recent studies have revealed that around 15% of the Americans do not use the internet.

Almost one in six marriages that take place today happen because the couple met online.

It took the radio 38 years and the television 13 years but the World Wide Web only 4 years to reach 50 million users.

The entire World Wide Web used to be just one computer. All of it happened to live inside the Next computer owned by Tim Burners Lee.

The mass of all material on the internet is 0.2 millionths of an ounce. This is equal to the weight of the smallest possible grain of sand.

How would the world be now, had the World Wide Web never been invented? Leave your thoughts below. And, happy birthday to our beloved www!